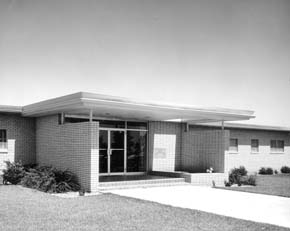 To secure long-term financial security, the Board began exploring forming a Hospital District. The Texas Legislature approved legislation in 1987, but the initial county-wide election failed. Legislation was amended in 1989 and another election planned for May 1990. On March 12, 1990, the commissioners' court appointed a temporary Hamilton County Hospital District Board consisting of Ramon Haile, Bill Craig, Fay Schrank, David Lengefeld and T.P. Medlock. After numerous, often hotly contested community meetings, an election to approve the District was held in Hamilton County Precincts 1, 2 and 4 on May 4, 1990, and the vote passed. Hamilton General Hospital transferred to the Hamilton County Hospital District on May 29, 1990.

A 34-bed, 39,000 square foot $7.5 million replacement facility was built in 2004, admitting its first patient on January 12, 2005. The financing was accomplished with revenue bonds, not requiring tax-backed bonds.

For 15 years, Ping Tan, M.D. cared for the residents of Hamilton as sole provider. He worked during a tumultuous time in the HCHD's history putting in 24/7/365 to insure quality care in the Hamilton community. Dr. Tan has now retired, but can still be seen visiting the campus from time to time.

In 1997, James R. "Randy" Lee, M.D. completed his medical training and returned to his hometown of Hamilton, Texas to practice. He brought with him a fellow family practice doctor. Together they began the Family Practice Associates and a partnership with Hamilton Healthcare System. A new era in Hamilton's healthcare was born.